What is Emu Oil?

Emu oil is a prized natural health remedy, known for its natural healing and soothing properties. Emu oil is high in unsaturated fatty acids and omega 3, 6 and 9, emu oil has excellent anti-inflammatory properties, and has been proven to aid with arthritis, joint aches and pains and skin inflammation among many other issues.

Emu oil has been used by Indigenous Australians for tens of thousands of years prior to European colonisation. Within the Sydney basin, the native emu is known as Murawang in Eora culture and Birabayin to the Darug inhabitants. The native emu was a vital source of both food and medicine for Indigenous groups living in areas to which it was prevalent. The fat was used medicinally to dress wounds, relieve muscular pain, and was rubbed into the skin as an ointment. It was also used as lubricant for traditional tools and utensils and was an ingredient in traditional ceremonial paints.

Scientific research into the healing properties of emu oil has accelerated greatly in the last 25 years and continues to investigate the expansive health benefits of emu oil.

What is Emu Oil made of? 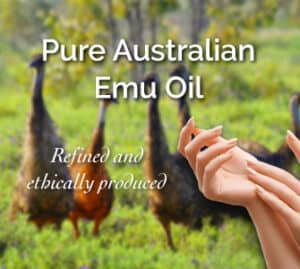