Australians were born to roam. You can find us living and working all over the world, soaking up new cultures, languages and lifestyles. Despite our great adaptability, there are certain foods we cannot live without. Childhood rituals, like Nestle Milo and milk after-school, or polishing off a box of BBQ shapes in front of the box, occupy a special place in our hearts that new adventures can’t replace. And right up there near the top has to be Vegemite.

What the heck is Vegemite?

Since 1922, Vegemite has confirmed its status as a food staple in Australia – check out the famous original add here.

It’s the colour of axle grease, with a similar texture, and actually is made from a yeast extract, flavoured with vegetables and spices (who knew?). Despite its appearance, we love the stuff and a jar is sold nearly each year for every Australian.

Only one jar a year per person? Yup, that’s right. Vegemite has a very strong taste, and if not eaten somewhat sparingly, the flavour can be completely overwhelming. As any Australian will tell you, a little goes a long way and it’s definitely not a ‘more is better’ spread, like peanut butter or Nutella.

What do Americans think of Vegemite?

We’re not offended when people don’t like Vegemite. In fact, Aussies find it rather entertaining watching Americans try Vegemite for the first time. We love the stuff and nothing anyone says will ever change our mind.

Hugh Jackman Shows Jimmy Fallon how to each vegemite. 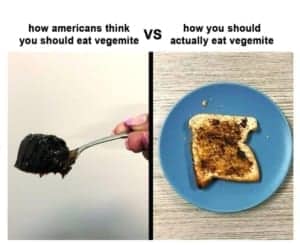 For many Aussie kids, Vegemite is among one of the first foods they’ll eat. Despite its strong taste, Australian babies are commonly given Vegemite on rusks, crackers or toast. As we grow, we snack on Vegemite scrolls, get Vegemite sandwiches in our lunch boxes, and branch out into new combos, and start pairing Vegemite with other ingredients, like cheese, tomato or avocado.

Many Australian cooks slip a teaspoon into their spag bol and casseroles for an added flavour boost, and one hint going around was that a spoon of Vegemite swallowed before bed after a big night will help ease the hangover (warning: only for the game!).

Despite the Australian propensity to wander and explore the world, we get surprisingly homesick. Nothing comforts like food, so if you know an Aussie living in the States who needs a bit of Australian love, (or are one yourself), order an Aussie Snacks Care Package today, and enjoy the comforts of home. 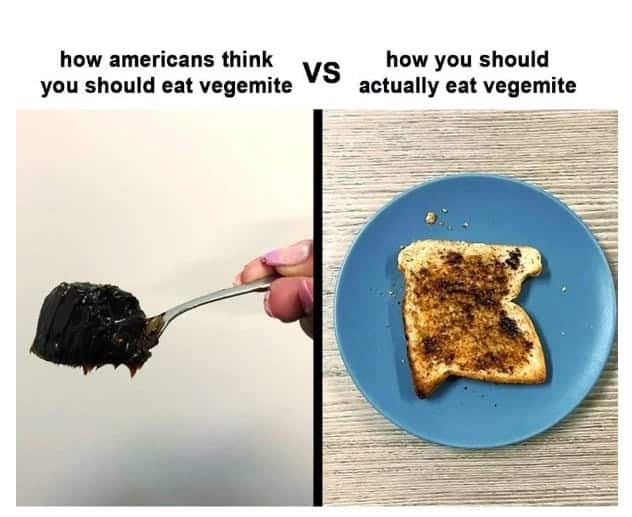 Americans can’t get enough of our Chicken Salt